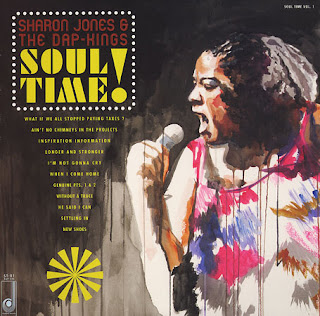 With every album Sharon Jones and the Dap-Kings release, the suspicion increases that the recordings might be superfluous to proceedings: that what really counts with this band is the blistering live show. Soul Time! feels like merchandise-stall fodder: stacks of tracks have been issued before, and even those making their first appearance on disc are far from new – most glaringly Longer and Stronger, written to celebrate Jones's 50th birthday in 2006. Then again, newness is a relative concept for a band trading in funk and soul licks patented decades ago, whose avowed aim is to party like it's 1969. And even if the production job by Dap-Kings' frontman/bassist/chief songwriter Bosco Mann is too pristine, there is a crackle in the band's playing that, in the best songs, fans to a full-scale blaze. There is a filthy energy to the thrusting When I Come Home, while New Shoes bounces along with so much fierce attitude, it hardly matters that the song is an amalgam of cliches. 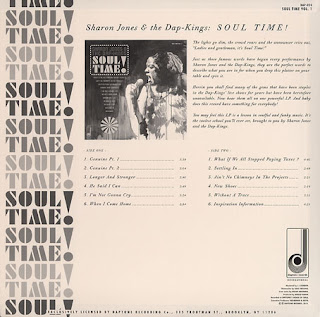 Edition of 5000 copies only. Released for the Record Store Day Black Friday 2011 event.

Recorded at Daptone's House of Soul.

Forty very happy minutes in SJDK’s discrete funk universe.
Daryl Easlea 2011-11-07
Few acts have created their own universe as successfully as Brooklyn-based Sharon Jones and the Dap-Kings. Forming in 1996, the band’s quest to create bona-fide funk-soul has long outlived their original critics’ view that the 10-piece band was merely some form of extended pastiche. Using only original instruments from the 60s and 70s and recording in glorious analogue, they eschew any post-modern references and create full-on, joyous grooves which achieve their aim of sounding like they were dug up in some dusty old vinyl shop.
Having cemented their reputation in the UK as being Mark Ronson’s house band and featuring strongly on Amy Winehouse’s Back to Black album, their albums have never quite captured their full force as a live act. Soul Time!, a compilation of singles, B sides and live favourites of the past decade comes pretty close though, and serves as a perfect introduction to the band. Showcasing bandleader Bosco Mann’s soulful writing, Soul Time! scores with its note-perfect emotion and keening brass arrangements.
Genuine (Parts 1 and 2), a single in 2004, opens here, complete with its fade and return; it sounds like something from James Brown’s People label, and sets the album’s relentless, upbeat tone. New Shoes, written by guitarist Binky Griptite, is a pounding northern soul-influenced stomper. The 2009 Christmas single, Ain’t No Chimneys in the Projects, is the most successful track here and underlines their formula perfectly – taking a beguiling title and subject matter (how a little girl receives Christmas presents in a chimney-less flat) with sensitive, nostalgic arrangements. Co-writer Jones, of course, is the star, and sings of her mother, soulfully conveying her emotion and strength.
The Dap-Kings have also recorded cover versions sparingly (remember their version of Janet Jackson’s What Have You Done for Me Lately?) – and were therefore able to dodge carefully the Live Lounge-inspired tribute craze of the mid-00s. The lone cover on Soul Time! is a beautiful, tender reading of Shuggie Otis’ Inspiration Information that fills out the sketchiness of the original without losing any of its tentative, fragile wonder.
There is nothing modern about Soul Time!, yet it sounds both refreshing and contemporary. The exceptional musicianship and impeccable vocals may not be to everyone’s taste, but for 40 very happy minutes, you can revel in SJDK’s very discrete world.
Bejegyezte: Audio Design Studio dátum: 15:50