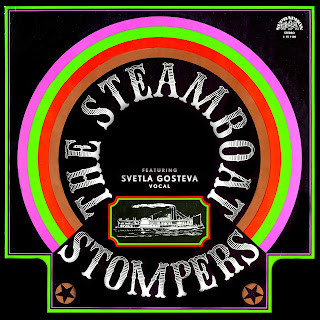 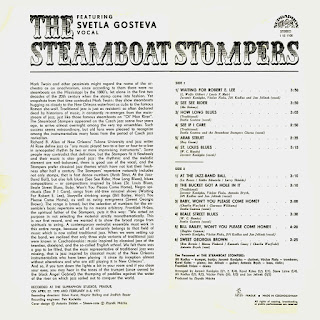 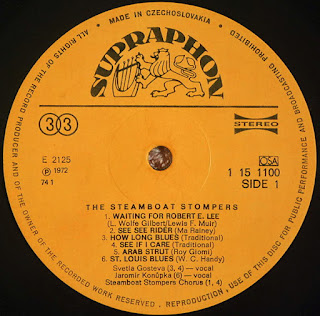 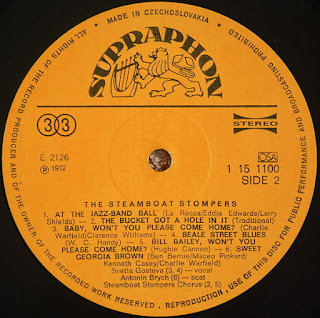 2 - THE BUCKET GOT A HOLE IN IT
(Traditional)
Jaromír Konúpka, Váciav Fiala, Antonín Brych,
Jifí Kadlus and Jan Jelínek (vocal)

The Personnel of THE STEAMBOAT STOMPERS:

Mark Twain and other pessimists might regard the name of the orchestra os an anachronism, sínce according to them there were no steamboats on the Mississippi by the 1880’s, let olone in the first two decodes of the 2Oth century when the stomp came into fashion. Vet snapshots Írom thot time contradict Mark Twain: they show steamboats hugging os ciosely to the New Orleans waterf ront os cubs to the famous Roman she-wolf. Troditional jozz Is just os resistont: so often deciared deod by historians of music, it constantly re-emerges Írom the mainstream of jazz, just Jike those Íomous steomboats on “01’ Man River”. The Steamboot Stompers oppeared on the Czech jazz scene four yeors ogo, to orrive olmost overnight among the very top ensembies. Such success seems extraordinary, but old fons were pleased to recognize omong the instrumentalists mony faces from the period of Czech jazz revivolism.
Richard B. Allen of New Orleans’ Tulane University ond jazz writer Al Rose define jazz os “ony music played two-to-a-bar or four-to-a-bar in syncopated rhythm by two or more improvising instruments”. Some people may contradict that definition, but the Stompers fit it flawlessly ond their music is also good jozz: the rhythmic ond the melodic element are well-balanced, there Is good use of the vocal, ond the Stompers prefer clossical jozz themes which hove not lost their freshness after half a century. The Stompers’ repertoire noturally includes not only stomps, thot is fast donce numbers (Arab Strut, At the JazzBond Ball), but also folk blues (See See Rider, How Long Blues), blues compositions — or compositions inspired by blues (St. Louis Blues, Beale Street Blues, Boby, Won’t You Please Come Home), Negro spirituals (See lf I Care), songs from old-time minstrel shows (Waiting For Robert E. Lee), Storyville drinking songs (Bill Boiley, Won’t Vou Please Come Home), os well os swing evergreens (Sweet Georgia Brown). The range Is broad, but the selection of numbers for the ensemble’s bosic repertolre was by no means arbitrary. Frantiek Hrúza, the spirituol father of the Stompers, puts it this way: “We acted on purpose in not selecting the materiol strictly monothemotically. This Is our first record, ond we wonted it to show the broad range Írom spirituals to swing. A contemporary revivalist ensemble must work in this entire range, becouse ali of it certainly belongs to that field of music which is now colled traditionol jazz. When we were setting up the band, we realized that only three style variants of troditionol jazz were known in Czechosiovakia: music inspired by ciassicol jozz of the twenties, dixieland, ond the so-calied Engiish school. We felt there wos o gap to be filled, that the main representative of troditional jazz wos missing, that is jazz inspired by clossical music of the New Orleans instrumentalists who have been playing it since its inception almost without alterations ond who are still playing it in New Orleans”.
And so, if you turn down the lights a bit in your room ond if you close your eyes, you may hear in the tones of the trumpet (once owned by the black Angel Gabriel) the thumping of poddles against the water of the nyer on which jazz sailed out to conquer the world.