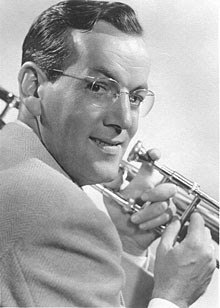 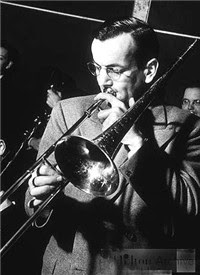 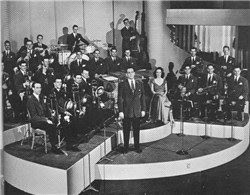 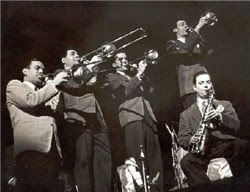 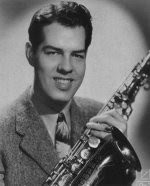 Born: March 1, 1904 | Died: December 15, 1944
Shortly after the beginning of the 20th century, in a small rural Southwestern Iowa town, a boy was born to Elmer and Mattie Lou Miller. The date was March 1, 1904 and the town was Clarinda. The boy that was born that night was named Alton Glen Miller (later changed to Glenn) and when he uttered his first cry, Clarinda heard Glenn Miller’s first “moonlight serenade.” Glenn’s first serenade was not particularly unique as it had been sung by children for centuries and was barely heard across South 16th Street. However, his second Moonlight Serenade was a composition he wrote while studying music under Dr. Schillinger in New York City. Glenn’s second Moonlight Serenade was unique, becoming the theme song of his number one Big Band and heard literally all around the world.

Glenn’s grandparents were a part of the westward movement of people during the 1800's and moved to the Clarinda area around 1870. During their stay in Southwest Iowa, their son Elmer married Mattie Lou Cavender and before this young couple left Clarinda, their first son, Dean, was born; followed by a second son, Alton Glenn Miller, on March 1, 1904.

In hopes of a brighter future, the young couple decided to homestead and moved on west in 1907 to Tryon, Nebraska where they lived in a sod house. In the evenings, Glenn’s mother, Mattie Lou, would play a simple pump organ which helped ease the lonesome existence on the flatlands of Nebraska. If you think it is a long lonely drive across Nebraska today, you can imagine what it was like to be there in 1907. Mattie Lou started a school called Happy Hollow and her children would sing songs as they rode in a wagon on their way to school. The soothing music of his mother in their sod house and the uplifting songs on the way to school must have given Glenn a greater meaning and appreciation for music. Before leaving the sod house, Mattie Lou gave birth to a third son, Herb, in 1913.

In 1915, Glenn’s family moved to Grant City, Missouri where he went to grade school, worked for the town bandsman John Mosbarger, was given his first trombone and then played in the town band.

In 1918, Glenn’s family, including an infant daughter, Irene, moved again to Fort Morgan, Colorado where Glenn went to high school. During his senior year, Glenn decided to try the game of football, and by the end of the season, he was chosen by the Colorado High School Sports Association as “the best left end in Colorado.” Football wasn’t Glenn’s only interest, however, as he had become very interested in a new sound called dance band music. Glenn enjoyed this music so much that he and some classmates decided to start their own band. In fact, Glenn was so excited about this new music that when it came time for his graduation in 1921, he decided to skip his graduation ceremonies and instead traveled to Laramie, Wyoming to play in a band. Meanwhile, back home, Glenn’s mother had to accept his diploma and the principal commented, “Maybe you’re the one who should get it anyway; you probably worked harder on it than he did!”

Bandleader Glenn Miller (gmcivil.jpg 7476 bytes)By now, Glenn had made the decision that he was going to be a professional musician. His first professional contract was signed with a Dixieland group called Senter’s Sentapeeds. To most people it sounds like something you would step on rather than listen to. Then another opportunity opened up where Glenn could play in the Holly Moyer Orchestra in Boulder and earn enough money to attend the University of Colorado. This lasted for two years, but in 1924, Glenn’s musical ambition, and a new job with the Tommy Watkins Orchestra, caused him to discontinue his college education so that he could spend full time playing and arranging music. Glenn eventually headed for Los Angeles, where he had heard there were numerous band opportunities. He soon got the chance to join the Ben Pollack Orchestra, a band noted for finding talented musicians. While playing with Pollack’s band, Glenn roomed with another rising star, a clarinetist from Chicago named Benny Goodman.

In 1928, after working in Los Angeles and Chicago, Glenn moved on to New York City where he worked with bands of Ben Pollack, Red Nichols and Paul Ash as a trombonist and arranger. In 1932, Glenn organized the Smith Ballew Band, and worked two years as manager, arranger and trombonist. In 1934, he helped the Dorsey brothers to organize their first full-time Big Band and in 1935, he organized Ray Noble’s American band.

Finally, in 1937, Glenn decided to fulfill his dream and organize his own band. This first band soon ran into financial difficulties and had to disband, but Glenn was not one to give up and he tried again in 1938. This time was different, and in March of 1939, his band was chosen to play the summer season at the prestigious Glen Island Casino, in New Rochelle, New York. This big break led to another important engagement at Meadowbrook, New Jersey in the spring of the same year. Both places offered frequent radio broadcasts, and by mid-summer, the Miller Orchestra had developed a nationwide following. In the fall of 1939, it began a series of radio broadcasts for Chesterfield cigarettes which increased its already great popularity. Thereafter, the band was in constant demand for recording sessions and appeared in two films; Sun Valley Serenade in 1941 and Orchestra Wives in 1942.

Major Glenn Miller In 1942, at the peak of his civilian career, Glenn decided he could better serve those in uniform by putting one on himself. By doing this, the band gave up a $20,000 weekly income. Too old to be drafted at age 38, Glenn first volunteered for the Navy but was told that they didn’t need his services. Not giving up, Glenn wrote to the Army’s Brigadier General Charles Young on August 12, 1942. Miller persuaded the Army to accept him so he could in his own words, “put a little more spring into the feet of our marching men and a little more joy into their hearts and to be placed in charge of a modernized army band.” After being accepted in the Army, Glenn’s civilian band played their last concert in Passaic, New Jersey on September 27th, 1942. It was such a sad event that the band couldn’t finish playing the closing theme song, Moonlight Serenade.

Glenn soon became part of the Army Specialists Corps with the rank of captain. For the next year and a half, besides arranging music, Glenn created and directed his own 50-member band. Captain Miller’s mission was morale building, bringing a touch of home to the troops and modernizing military music. Glenn was also a talented fund raiser, and raised millions of dollars in war bond drives. He also attracted Air Corps recruits through his I Sustain the Wings weekly radio broadcasts.

Still wanting to do more, Glenn arranged for overseas duty for the band. Arriving in London, the band was quartered at 25 Sloane Street, an area in constant barrage by German V-1 buzz bombs. Glenn was immediately concerned for the band and made arrangements for the unit to move to new quarters in Bedford, England. The band moved on July 2, 1944, and the very next day a buzz bomb landed in front of their old quarters, destroying the building and killing 100 people. The Glenn Miller Army Air Force Band was extremely busy and Glenn wrote home that in one month they played at 35 different bases, while performing 40 radio broadcasts in their spare time.

Finally, on December 15, 1944, Glenn boarded a single engine C-64 Norseman aircraft to travel to Paris, France where he was to make arrangements for a Christmas broadcast. Tragically, the plane never reached France and was never found. The band, without Miller, performed the scheduled Christmas concert under the direction of Jerry Gray and continued to perform, playing their last concert on November 13, 1945 at the National Press Club dinner for President Truman in Washington, D.C. At that time, General Dwight Eisenhower and General Hap Arnold thanked the band for a job well done.

Glenn Miller will be remembered for many things; his musical style, showmanship, hard work, perseverance, and much more. But his patriotism in giving up his number one civilian band to enlist in the United States Army Air Corps, his pioneering efforts to modernize military bands and his supreme sacrifice for his country have caused him to be remembered as Clarinda’s and America’s favorite musical patriot.

Glenn Miller’s life cannot easily be summed up in a few words. He put more in his short life of 40 years than most people do in a longer lifetime.
Bejegyezte: Audio Design Studio dátum: 23:47