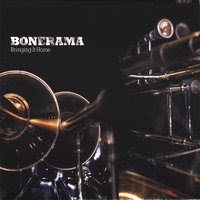 Bonerama, the New Orleans horn band boasting four trombones, seems
to have tired of beginning its album titles with the word "Live"
(Live at the Old Point, Live from New York), so the group's third
album is not called "Live from Tipitina's" even though it is; it's
called Bringing It Home, which is also accurate, since Bonerama
was formed at Tipitina's nightclub in New Orleans in 1998. If the
Dirty Dozen Brass Band revised notions about a horn outfit's sound
and repertoire, Bonerama takes those revisions a step further. Its
ensemble sound sometimes suggests the rock group Chicago and
sometimes a small, well-rehearsed college marching band. Although
many of the tunes are originals by the bandmembers, the selections
that stand out are the surprising covers, such as Led Zeppelin's
"The Ocean" and two songs from the Beatles The White Album, "Yer
Blues" and "Helter Skelter." The arrangements replace some of the
guitar parts with horn parts, naturally, but the influence of
classic rock, particularly of Jimi Hendrix, remains in guitarist
Bert Cotton's acid-tinged lead work. To demonstrate its jazz
chops, Bonerama also turns in a strong cover of Thelonious Monk's
"Epistrophy." Yet for all this eclecticism, the group remains at
its core a New Orleans horn band, and by the end of the set it has
evoked Louis Armstrong and the Meters before ending with a hidden
track that is a musical commercial for another city nightspot, all
of which confirms that the group's decision to keep recording live
albums, especially at its home base, is a good one.