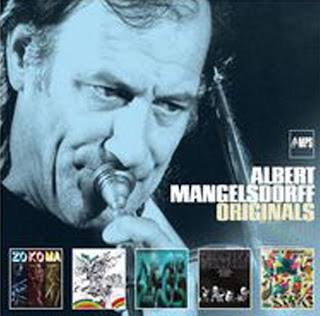 
Guitarist Attila Zoller, alto saxophonist Lee Konitz and trombonist Albert Mangelsdorff had played with one another on earlier occasions for over a decade, but this 1968 recording was their first together though Zo-Ko-Ma is officially billed by producer Joachim Ernst-Berendt as the "Attila Zoller-Lee Konitz Quartet with guest Albert Mangelsdorff." Joined by bassist Barre Phillips and drummer Stu Martin on some tracks, a good deal of the music has an experimental feeling to it, especially Konitz's "Feeling-In and Filling-In Villingen," which feature overlapping improvisations by the three players. Zoller's easygoing waltz "At Twighlite" and Mangelsdorff's "Alat's Mood" (the latter a trombone/guitar duet) are straight-ahead arrangements, while Konitz's haunting "Danke for the Memory" is a spacy trio piece with bass and guitar. Issued on LP by MPS in Europe, this extraordinary session is long overdue to be re-released on CD. ~ Ken Dryden, All Music Guide
Bejegyezte: Audio Design Studio dátum: 20:16