Frank Sinatra - Frank In The 50s 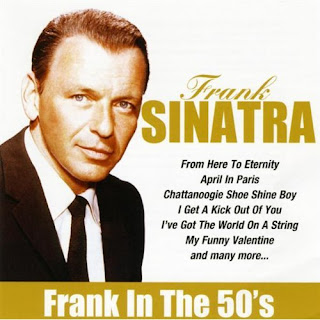 The decade of the 50's didn't start out smoothly for Frank Sinatra. Career-wise, things were bleak for the legendary performer as he suffered vocal chord hemorrhages, an all too public break-up with his wife and a tumultuous affair with actress Ava Gardner (who he eventually married).

In addition to the physical ailment that temporarily crippled his greatest asset, Sinatra's volatile nature had soured many of his fans and show business contacts. By 1952, he had parted ways with Universal Studios, CBS-TV, Columbia Records and his agent.

Known for well-publicized bouts of temper (that included brawls with reporters) and other public lapses in polite behavior, Sinatra had exhausted the patience of many. By the time the 1940's came to an end, most believed his career had done likewise. But Sinatra had other ideas.

Born Francis Albert Sinatra on December 12, 1915 in Hoboken, New Jersey, Sinatra had become a show business icon by the early 1940's with a string of hit records, films and live performances. And the tenacious Sinatra had no intention of calling it quits in the 1950's.

In a shrewd career move, Sinatra agreed to work for a fraction of his usual fee for his work on 1953's From Here to Eternity. A Best Supporting Actor Oscar later, his career was back on track.

Sinatra's Oscar-winning performance as Maggio sparked new interest in the "The Kid from Hoboken". In addition to his career rebound, he had also made a physical comeback. The unstoppable Sinatra had recovered his legendary singing voice and offers poured in from all sides.

Signing with Capitol Records in 1953, Sinatra proceeded to record a seemingly endless string of hits considered by many to be his best work.

With songs like I've Got The World On A String, I Get A Kick Out Of You and In The Wee Small Hours Of The Morning, Sinatra solidified his reputation as a world class entertainer.

Seeming to some like a workaholic, Sinatra even turned his fun into work during the 50's. Assembling a group of his friends (Dean Martin, Peter Lawford, Sammy Davis, Jr. and sometimes Joey Bishop), Sinatra knocked the entertainment world on its ear with his gang of entertainers that came to be known as "The Rat Pack".

Appearing together live, on recordings and in films, "The Rat Pack" caroused and performed together for years, and even managed to strike a blow for civil rights in the process.

By demanding desegregation at all their performance venues and popular off-stage haunts, "The Rat Pack" showed the world they weren't such "rats" after all.

Having proven his resiliency in the 50's, Sinatra continued on to become known as one of the greatest performers of all time. And even after his death in 1998, his career lives on.