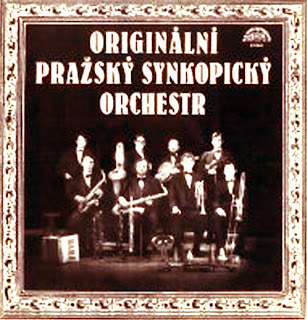 
The concert of the Original Prague Syncopated Orchestra at the night concert of the Oude Stijl Jazz Festival in Breda ( The Netherlands) on the 6th of May, 1978, was a great event. The concert took part in one of the large concert halls in Het Turfschip in Breda.
On stage eight persons dressed as if they were dropped here as a part of an exhibition about the Roaring Twenties. The band, its official Czech name is ORIGINALNI PRAZSKY SYNKOPICKY ORCHESTR, was unknown to most people in the audience. When the concert started everybody was amazed by the 1920s sound the band produced.
I still remember the thrill the moment the tune Five Foot Two Eyes Of Blue was played and Pavel Klikar, the leader and vocalists started singing the first lines of the theme. It was as if everybody in the audience got the same experience on the same time: this band were the California Ramblers alive, a rebirth from 1925. The screaming and yelling of the audience has been saved on the LP that was released of this event. Each tune they performed gave the same thrill. Sweet Henry, as played by Noble Sissle and Eubie Blake was such another thrill and when the band played I'm Not worrying it was as if Clarence Williams in person entered the stage.
The enthusiasm of the audience was overwelming. The end of the concert was rather chaotic. When Pavel Klikar announced that the band would play its last number, the audience didn't except that and it had to play two or three extra tunes. You can hear the desperation in Klikar's voices when he says: Really really at last ..... as they runed out of repertoire.

The way the Original Prague Syncopated Orchestra performed was historically thought out in detail. The dress, the hair cut, the announcements, the instruments and the sound. The band members played their instruments like it was usual in the 1920s. No drums, for example. A (snare) drum, although used in those days on stage, was never used in accoustic recordings as its sound would upset the recordings. That's why these bands often used woodblocks or a cymbal for rhythm. But not the Original Prague Syncopated Orchestra.
Bejegyezte: Audio Design Studio dátum: 12:21