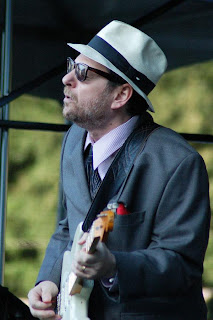 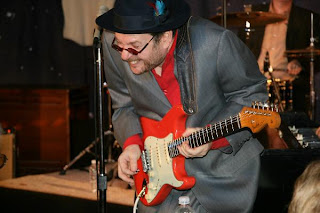 
Ronnie Earl was born Ronald Horvath in Queens, New York, on March 10, 1953. After picking up his first guitar twenty years later, he went on to stretch the boundaries of electric blues guitar playing higher, lifting hearts and souls a little higher as he did. Like a harmonic seventh note sliding its way into a piece of music before being felt, he would eventually emerge into the New England blues scene as a budding young guitarist.

In 1963, when he was ten years old, Ronnie�s parents signed him up for piano lessons, which he quickly abandoned, discovering that he disliked the discipline of practicing. He graduated from Forest Hills High School in New York in 1971. After high school, Ronnie attended C.W. Post College on Long Island for a year and a half studying American History. It was during these early college years that Ronnie first started playing the guitar. Eventually he transferred to Boston University where he would graduate in 1975 with a Bachelor�s Degree in Education & Special Education. Ronnie spent a short time teaching and working with children with special needs in the Newton school system, as well as the League School in Government Center. In 1973, Ronnie purchased a Martin acoustic guitar; however, he returned it the very next day for a Fender Stratocaster. He took a serious musical turn toward the blues after attending a Muddy Waters concert at the Jazz Workshop, a small club in Boston. By his third year in college Ronnie was seriously pursuing the guitar, now practicing hours at a time having rediscovered the discipline that would continue to serve him well throughout his life. Ronnie has said that musically it was his time to �catch up with the world.�

Dave Limina, Hammond B3, Piano
Dave Limina is an Assistant Professor in the Piano Department at Berklee College of Music, where he received the Most Valuable Contribution to the Performance Curriculum Award in 2001 for his work in developing the Hammond organ program. An experienced session keyboardist, composer, and arranger, Dave has performed with Ronnie Earl and the Broadcasters, Lori McKenna, Duke Robillard, Paula Cole, Mark Murphy, Robert Lee Castleman, and the first national touring company of the Broadway musical Rent. He received Boston Music award nominations for his work with Courage Brothers, Ronnie Earl, and Mighty Sam McClain. He played keyboards on Michelle Willson's Wake Up Call, which was a Boston Music Awards winner in 2001. Dave does extensive session work in Boston and New York featuring his piano, Hammond organ, and vintage keyboard playing. He is the author of Hammond Organ Complete (Berklee Press) and the instructional video/DVD Accelerate Your Keyboard Playing. He is a monthly contributor to Keyboard magazine of Japan.
Jim Mouradian, Bass
Jim Mouradian has been a member of Ronnie Earl and the Broadcasters since 2000. Jimmy grew up immersed in a family of classically trained musicians, picked up a bass in junior high and has been playing ever since. He is also a legendary luthier, who has designed his own line of Mouradian guitars and handles every guitar he works on with meticulous detail. He and his son, Jon, operate Mouradian Guitar Repair in Cambridge, MA, where they are known as "guitar gods" and "guitar repair wizards", although Jimmy insists that his favorite role is that of being a dad and grandfather. Visit www.cambridgemusic.com
Bejegyezte: Audio Design Studio dátum: 16:53