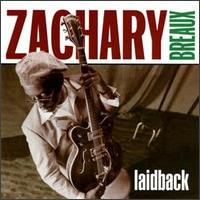 Listening to Zachary Breaux's commercial work on Laidback, it's clear that the guitarist was capable of a lot more. That said, this isn't a bad album -- it isn't a masterpiece, but it's enjoyable most of the time. Mindful of George Benson's more commercial instrumental work, Breaux gets into a likable jazz/R&B/pop groove on such originals as "Small Town in Texas" and "West Side Worry." Harmonica great Toots Thielemans has pleasant, if unremarkable, cameos on John Barry's "Midnight Cowboy" and Breaux's mellow title song, while singer Audrey Wheeler joins Breaux for a vocal duet on a cover of Little Anthony & the Imperials' 1960s hit "Going Out of My Head." Though Breaux wasn't a bad singer, this track really belongs to Wheeler. Make no mistake: Laidback is a decent CD -- although it's a shame to hear Breaux simmering so much of the time when you know he was quite capable of burning. ~ Alex Henderson, All Music Guide
Bejegyezte: Audio Design Studio dátum: 20:25