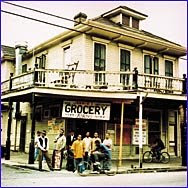 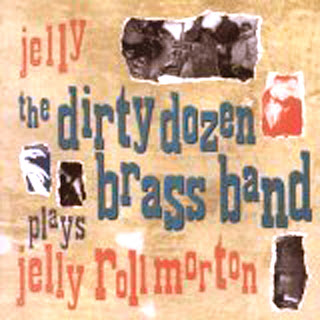 
The Dirty Dozen Brass Band in its prime successfully mixed together R&B with the instrumentation of a New Orleans brass band. Featuring Kirk Joseph on sousaphone playing with the agility of an electric bassist, the group revitalized the brass band tradition, opening up the repertoire and inspiring some younger groups to imitate its boldness. Generally featuring five horns


New Orleans music ushered in the 20th century with the wail of a joyful noise: collective improvisation, syncopated rhythms, eclectic stylization's, and an infectious joie de vivre that was exhilarating. Indeed, thanks to New Orleans musicians such as King Oliver, Jellyroll Morton, the ODJB, and, above all, Louis Armstrong, the 1920s became known as the "jazz age."
Just like early jazz was an amalgamation of the music of its era, The Dirty Dozen Brass Band's musical revolution was actually a reintroduction of the basic eclecticism that made jazz the most dynamic music of the 20th century. With the release of their new Mammoth Records recording Buck Jump, The Dirty Dozen Brass Band is poised to extend New Orleans music into the 21st century.
Founded in April of 1977, the formation of the Dirty Dozen created a musical revolution in New Orleans. For over seventy-five years, the brass band tradition existed largely unchanged until this forward looking, bebop influenced ensemble completely changed both the style and the repertoire of brass band music.
Trumpeter and bandleader Gregory Davis points out, "The concept of the Dirty Dozen is to play and experiment with all types of music. We will take a song - and not worry about if it is a jazz song or any particular type of song - we'll just take a song and see what we can do with it as The Dirty Dozen."
This time around the band has called on the services of John Medeski of Medeski, Martin & Wood to produce their new recording. "It's the first time we worked with a producer who actually plays an instrument on the record and is making a living as a musician. The company went for the first take concept. For them funky meant if it had a mistake in it, so what. And that was cool because it was like doing it live on a gig," commented Gregory Davis.
The results are impressive, Buck Jump offers a broad range of Dirty Dozen stylizations. From to a rollicking interpretation of "Run Joe," a song associated with jump blues master Louis Jordan all the way to a sax-heavy, hard blowing interpretation of Marvin Gay's anthem "Inner City Blues." Other tracks like "Unclean Waters" and "Pet the Kat" pack the same punch that the band is legendary for delivering in concert. There is no question that John Medeski's influence has helped The Dirty Dozen finally record an album that sounds like it catapults you into the middle of one of their live performances.
This spirit of experimentation has led to the Dirty Dozen playing songs as diverse as the jump blues war horse "Night Train," Thelonious Monk's modern jazz classic "Blue Monk" (which is now part of the standard New Orleans brass band repertoire), folk music such as "Little Liza Jane" and even television cartoon music such as the "Flintstones" theme. "We not only do jazz shows, we do rhythm and blues festivals, rock and roll gigs, blues festivals. Because we play a variety of music, it allows us to get into different venues that we probably would not have been invited to otherwise."
For over two decades the Dirty Dozen has literally been barnstorming the world (more than thirty countries on five continents) - they once knocked out 72 gigs in 90 days. They've played all the major festivals - Newport, New York, New Orleans Jazzfest, Playboy, Montreaux - and they have played one-nighters in no name venues in small towns you need a local map to find. If they didn't love the music, they couldn't keep up the pace, but, as their signature song exclaims, they roll on, confident that their "Feet Can't Fail Me Now."
Davis believes, "being a New Orleans band has marquee value. The other side of that coin is that people expect you to do a good job. The audience expects something special. So our challenge is, every night, to make sure that you are not only playing some good music, you have to also put on a good show."
Moreover, it's not just been dancers and the general public who have embraced the Dirty Dozen. The band is received broad critical acclaim including a "Jazz Album of the Year" award from CMJ, five star ratings from Downbeat and Jazz Times. Additionally, they have performed and/or recorded with an assortment of established musical giants: jazz greats Dizzy Gillespie, Danny Barker and Brandford Marsalis; New Orleans legends Dr. John, The Neville Brothers and Dave Bartholomew; pop stars Elvis Costello, The Black Crowes, and the Cajun two-stepping of Buckwheat Zydeco.
With Buck Jump the Dirty Dozen have added another stellar chapter to their growing legend. The Dirty Dozen Brass Band are the quintessential New Orleans band and Buck Jump is their testament.
-------------------------------------------------------------------------------------------------
The Dirty Dozen Play Jelly Roll Morton (Columbia)
by Ric Stewart


The Jelly Roll Morton legend has grown by leaps and bounds in the 90's with re-issues of Morton's recordings, Jelly's Last Jam, a Broadway musical starring Gregory Hines, and now 'Jelly', the sixth release from The Dirty Dozen Brass Band. Morton's compositions are in good hands with the New Orleans octet who make it sound easy to hold onto the beat, the sense of play, and the sense of place embedded in these well-travelled tunes. This is essential New Orleans music, made more irresistable than ever by a timely, rich, digital recording. The Dirty Dozen pay a faithful tribute taking in Jelly's repertoire and putting out earbending re-arrangements complete with fanciful sycopated solos. All the tunes are recognizably both Dirty and Jelly.
While a few tracks on Jelly stand out due to sparkling arrangements by Gregory Davis, Roger Lewis, et al., it is a proper experience to let the whole cd wash over you in one listening. The group plays like a team with help from sidemen such as Eddie Bo on piano on "Dead Man's Blues", and 'Big Chief' and Smiley Ricks on the distinctive conga intro to "Jungle Blues". On 'Jelly', the Dirty Dozen creates aural and thematic unity and takes it in stride, most other recording artists these days would be doing well to perceive this as a potential goal.
The Dirty Dozen commemorate the importance of tradition as part of their job as a New Orleans Brass Band. For them to tackle an interesting one-off project, like 'Jelly', shows their respect for the history of the tunemaker as well as the tunes. Jelly Roll Morton deserves it- always flashy and brilliant as a composer, performer, pimp, pool-shark, card shark, racehorse owner, outrageous dresser and comedian- he stands out as a 20th Century music giant. Appropriately added details flesh out this historical project and set the composer's life and times against the background relief of his sounds. For example, in order to establish the feel of the tawdry late night atmosphere of the Red Light District during Jelly's time, on track five the late Danny Barker paints a picture in words of those wild, drunken times. He ought to know, he played with Jelly back in 1930! Jelly would be glad to be making such a strong comeback as he is on 'Jelly'.