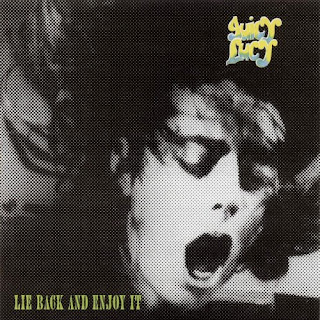 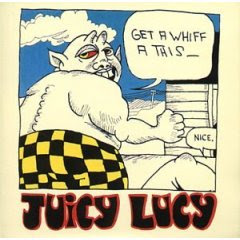 
`Juicy Lucy' was formed in 1969 by ace steel guitarist Glen `Ross' Campbell out of the ashes of 'The Misunderstood'. During its life span Juicy Lucy had two saxophonists, two keyboard players, three guitarists, two vocalists, and four bass players going through the ranks. By the time of the fourth album 'Pieces', there was not one founder member left. Even Glen `Ross' Campbell had left in despair. Regardless of all these musical chairs, on release this album went into the charts on the crest of a wave as Juicy Lucy had just had a hit single with `Who Do You Love'. The single reached #14 in the British Top Thirty and stayed there for three months. Then 'Lie Back And Enjoy It' (their next album was called 'Get A Whiff Of This', wonderfully funny titles, nearly as good as my favorite album title of all time - Spooky Tooth's `You Broke My Heart So I Busted Your Jaw' who says romance is dead?) was released on the progressive rock label Vertigo. Vertigo had the marvelously hypnotic record label that when it whizzed round on your turn table, would send you dizzy. Vertigo was the home record label for most of the bands that were considered underground or cult at the time such as 'Black Sabbath', `Uriah Heep', 'The Sensational Alex Harvey Band', 'Gentle Giant', and `Status Quo' to name but a few. Fortunately Repertoire Records have released this C.D. version of 'Lie Back and Enjoy It ' and a very good job of it they have done, too. They gave the buying public a very good deal with a full reproduction of the foldout cover and two extra bonus tracks to add onto the original nine tracks. But for those of you who miss the hypnotic record label, try your hand at the double C.D. 'Still Dizzy After All These Years', a fine collection of the Vertigo years featuring many bands that went onto bigger and better things, and some that for reasons only known by the masters of rock 'n' roll didn't. With the C.Ds and cover printed with the correct squiggles, 'Lie Back and Enjoy It' went straight into the British charts at #53 in November 1970.

The passage of time has not been kind to some of the songs on this album. Standard blues material with plenty of embellishments from the musicians currently find a home within the ranks. Hereby lays the most pressing problem. With such a liquid lineup it was hard for `Juicy Lucy' to actually sound like a band, not just a group of musicians thrown together in the recording studio. Half the band plays as if they were worried that they would soon be booted out of the band (they were), whilst the other half play as if they had the knowledge that after this recording they were going to move onto new fresh pastures (which they did - notably Micky Moody to 'WhiteSnake', Rod Coombes to `Stealers Wheel & then the Strawbs' and Keith Ellis to `Spooky Tooth').

Yet, there are some astounding performances from the guitar works of Micky Moody, the steel guitar works of Glenn `Ross' Campbell, the occasional saxophone break from Chris Mercer, and the ever impressive vocals of Paul Williams (one of the most underrated blues singers to ever tread the boards and bend a microphone. The first seven tracks are fair compositions including a cover of the old Willie Dixon Blues Classic 'Built for Comfort'. The band aimlessly stumbles through many genres of the rock 'n' roll spectrum, from blues to country, and heavy rock to pop. However, it's not until they crack open the Frank Zappa jewel from Hot Rats 'Willie the Pimp' that the band really jell, let their hair down, giving it a go with the confidence that these superior musicians should have. The results are startling with Paul Williams singing at his most Beefheartesque (I do not know if that's a word or not, but if it isn't, it should be) and Micky Moody laying down two smokin' slide guitar solos, while the whole band joins in the fun with a truly rumbustious display.

All in all a pretty average display (apart from the magnificent 'Willie The Pimp'), but worth the while if you fancy some of that early seventies feel.
Bejegyezte: Audio Design Studio dátum: 19:34

Címkék: Juicy Lucy - Lie Back And Enjoy It