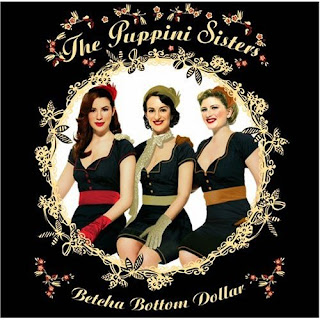 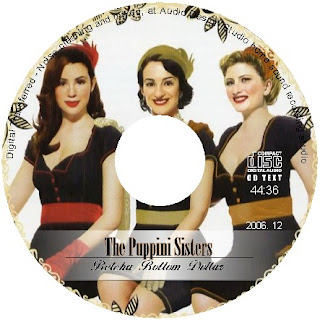 
The Puppini Sisters are a musical trio specializing in 1940s-style close harmony vocal music.
The members are Italian Marcella Puppini and English Stephanie O'Brien and Kate Mullins. Although the three are not related, they chose their name in tribute to The Andrews Sisters. Puppini first studied fashion design at St. Martins School of Art, and later joined Stephanie O'Brien and Kate Mullins at Trinity College of Music in London. The Puppini Sisters are currently supported by a three-piece band featuring Martin Kolarides on guitar, Henry Tyler on drums/percussion and upright bassist Henrik Jensen.
The group was founded by Puppini after she was inspired by the animated film Belleville Rendez-vous. The Puppini Sisters' debut single, "Boogie Woogie Bugle Boy", is a cover of the iconic hit single by The Andrews Sisters. One of the more unusual songs in their repertoire is Kate Bush's "Wuthering Heights".
The Puppini Sisters' second album, The Rise and Fall of Ruby Woo, followed in the tongue-in-cheek footsteps of Betcha Bottom Dollar, and included original compositions by Puppini, O'Brien and Mullins. The Ruby Woo of the album title is a reference to MAC Cosmetics' 'Ruby Woo' lipstick: a favourite of the rockabilly scene and of the Puppini Sisters themselves. 'Ruby Woo' is also the preferred lipstick of The Cure frontman Robert Smith, a singer Marcella Puppini has admitted she would love to duet with.
The Puppini Sisters were originally scheduled to appear on Making Your Mind Up, the United Kingdom's preselection show for the Eurovision Song Contest 2007, however their submitted material was deemed inappropriate.[citation needed]

Albums
Betcha Bottom Dollar (July 31, 2006 U.K., May 1, 2007 U.S., March 2008 France. According to the official website the album as of May 2, 2007 was ranked in the number two position on the amazon.com bestsellers list and as of May 9 number two on the U.S. Jazz Charts and number nine on the U.S. new artist chart
The Rise and Fall of Ruby Woo (October 1, 2007 U.K.), (February 2008 U.S.) featuring classic covers, 1940s style reworkings of contemporary music, and a selection of original compositions

Collaboration
The group recorded a close harmony version of the song "Apart of Me", by Stephen Coates of The Real Tuesday Weld, and acted in the video for the song, playing "a corpse, murdering waitresses, worms and chickens". The group used period piece costumes based on a painting of Madame de Pompadour designed by Vivienne Westwood in their video for Jilted, an original song written by Marcella Puppini (not to be confused with the 1954 Theresa Brewer country number).


Performances
2007 Their first American television appearance occurred on June 12, 2007 when the group performed "Tu Vuo Fa L'Americano" on The View a daytime talk show.
The group completed a two-week engagement that started on May 29 in the Oak Room at the Algonquin Hotel in New York City, where audience members included Frankie Avalon, Rex Reed and Danny Aiello. In the summer of 2007, they performed at the Lattitude Festival, the Glastonbury Festival, the Quebec City International Summer Festival and the Montreal Jazz Festival. In the second half of August 2007, they completed a United States club tour that included a stop at the World Famous Roxy Theatre in Los Angeles on August 18th. On September 30th 2007 they performed at The Ritz Ballroom in Manchester, England, before moving on to a sell out show at the Shepherds Bush Empire in London, England, on October 3 2007, where they were presented with a gold CD to commemorate 100,000 sales of their first CD.
According to the trio one of the unusual shows the group has played was a private party in a millionaire’s penthouse apartment in Moscow “at the top of this incredibly tall building"
2008 The Sisters international touring schedule intensifies with the release of Ruby Woo in the US and Canada. Tours of Germany, the Middle East and dates around Europe increase, and a major gig in London's Koko is planned for April. 2008 concerts include the Dubai International Jazz Festival and the Super Bowl Pre-Game Show. According to their website they will tour the United States in June as guests of Cyndi
Bejegyezte: Audio Design Studio dátum: 21:34