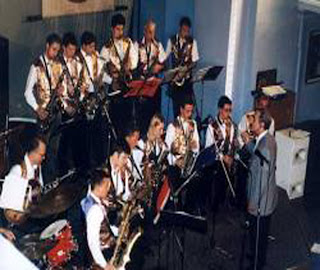 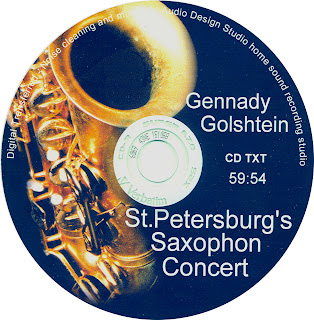 SPECIAL TO THE ST. PETERSBURG TIMES
Gennady Golshtein, who has taught saxophone in the jazz department at the Mussorgsky School of Music since its inception in the mid-seventies, has instructed everyone from Russia's greatest jazz export, Igor Butman, to local ska enthusiasts Alexei Kanev of Marsheider Kunst and Grigory Zontov of Spitfire.
"All of the best saxophone players in St. Petersburg have studied under Gennady Golshtein," says David Goloshchokin, the director of the Jazz Philharmonic Hall. "You only have to look at his band, Saxophones of St. Petersburg, to find the stars of tomorrow."
Golshtein's project, "Doomed To Be Happy," starring the Saxophones of St. Petersburg, comprised mainly of his students, is featured regularly at the Jazz Philharmonic Hall. The program also stars Goloshchokin on vibraphone, Vladimir Lytkin on piano, Stanislav Streltsov on drums, Yana Radion on vocals and Golshtein himself, on clarinet.
"The first set features my quintet performing melodies I have written in the American swing tradition," says Golshtein about the project. "The second set features the original inspiration for my songs - jazz standards from the thirties and forties performed by my big band, Saxophones of St. Petersburg."
Golshtein, dressed like a sleek big-band leader in a forties-era suit and tie, introduces every song by reading a translation of the lyrics for the audience. He asked an American friend, Elizabeth Davis, to write all of the lyrics for his original songs to "ensure authentic American speech." Yana Radion, who considers herself primarily a Latin-jazz singer, had to work hard on her pronunciation and phrasing in order to cultivate the quintessential swing era sound she now evokes, a style reminiscent of early Lena Horne and Helen Forest.
"Before I met Golshtein, I knew nothing about swing," Radion says. "In the five years that we have worked together, I have grown tremendously as a musician."
Golshtein, who has played jazz for over forty years, graduated from the Mussorgsky School of Music with a teaching degree, having never formally studied any instrument or composition. In the sixties, he joined the seminal Weinstein Orchestra, a well-known Leningrad dance band that is famous for having spawned other local jazz figures, such as trombonist Alexei Kannunikov, and saxophonist Oleg Kuvaitsev. Golshtein was then invited to play in a jazz quintet on national radio in Moscow.
"For six years we played serious jazz music on the radio," recalls Golshtein. "It was a strange time and many critics don't know about this period. They assume we played pop songs."
It wasn't until the chairperson of the Radio Committee ended up in the hospital for a long stretch, listening to the radio while recuperating, that he realized the volume of American music that Golshtein and his band were playing. The show was immediately cancelled because the Soviet government considered American music to be ideologically dangerous.
Disillusioned with Moscow and the jazz scene, Golshtein returned to Leningrad and begin studying viola, flute and music from the Renaissance. He spent the next fifteen years playing early music with a local group, with whom he toured Italy, Germany and the United States. The group disbanded in the early nineties. During this period, the Mussorgsky School of Music invited him to teach saxophone in their newly-formed jazz department.
"Once the 'early music' ended, I had a surge of nostalgia for the music I listened to as a child, old jazz orchestras like Benny Goodman and Artie Shaw. I started to write beautiful melodies."
Saxophones of St. Petersburg was formed in 1998, bringing together young students and the city's most celebrated saxophonists.
"I decided to bring all of the saxophone players at Mussorgsky and some of my former students together for a concert celebrating a friend's anniversary," explains Golshtein. "The audience enjoyed it. The saxophonists enjoyed it. At the time, I didn't have much hope for the project to continue, although I kept writing arrangements."
As for the future, Golshtein has no definite plans. "I have no idea what is coming next. I never expected to write all of those melodies and I am still trying to write them. I never envisioned that I would have this fantastic band, the Saxophones of St. Petersburg. I have what I have and I'm trying to enjoy it."
Bejegyezte: Audio Design Studio dátum: 17:39

Thanks for posting this superb album. I liked it very, very much.

Hello friends.
Ringtones are trend for everyone. Ringtones are wary. Ringtones bring joyful melodies. Did your ringtone satisfy? Which phone do you have the best ringtone? I will introduce you to the most popular tunes in 2018, you can refer and leave a review for us.

Here are the top 5 ringtones that are loved by 2018, please install the ringtone by following the instructions below:

I need your comment. Free ringtones fongr people around the world. You can visit my homepage to learn and reference more ringtones: https://ringtonesmobile.net/